My five favorite songs at the moment and the artists behind them.

This nostalgic song by Britney Spears was released in 2008. The song just makes you want to get up and dance. And what else would we expect from the iconic Spears? The strong beat and chorus leaves us wanting to listen to all of Britney’s albums.

Marina dropped her album “Ancient Dreams In A Modern Land” with ten songs equaling 36 min and 8 sec. The title song from the album is an electro-pop masterpiece. After hearing it I had to listen to it 5 more times, and now I know all the words. This song is great to sing in the car or listen to on your daily walk.

I’ve loved music by Hozier for years but this song just always sticks in my head. This alternative/indie song is much more mellow compared to numbers one and two from my list, but not any less admirable. The contagious melody and lyrical work is absolutely amazing. I love listening to this song while studying or relaxing.

Tame Impala released this psychedelic rock song in their album Currents. The drums and synthesizer add another level to this song that just pulls you in. Although six minutes long, the self reflective musical piece never bores you. The best time to listen to this song would be when you need to hype yourself up or need a break from working.

Ever since Paramore dropped this song in 2013, I'll go back to it every couple of months to belt out the lyrics. This song makes me want to dance and sing on my bed while jumping, like most people who listen to the composition. It’s a great song to play in the morning to start the day off right.

Those were my top five favorite songs at the moment, I hope you take a listen to some of them and like them too. Thank you for reading! 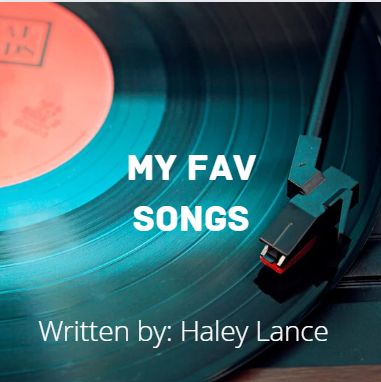