With SUUUUUPER Wild Card Weekend out of the way, the NFL playoffs move forward to the divisional round. There are 8 teams left battling it out for that luscious Lombardi trophy.

The divisional round will kick off at 3:30 CT with an intriguing QB matchup. Sunshine (Trevor Lawrence) vs Kermit the Frog (Patrick Mahomes). We saw the Jags win an improbable comeback against the Chargers last week. The Chiefs however did not play last week as they got the bye. Will that affect them this week I guess only time will tell? If I look at this game like Dr. Strange, there are only two outcomes I can possibly see. One is an absolute barrage of points coming from Andy Reid and Kansas City’s high-powered offense with the Jags being unable to answer back at all. Two it’s a close game through and through but the sheer mediocrity and inexperience of the Jags cause them to lose late in the fourth quarter. I really can’t pinpoint which outcome happens so I’ll take the latter simply for my own enjoyment. Chiefs send the Jags Cinderella story packing in a close one, 34 - 30 Kansas City.

The Saturday late kickoff, 7:15 CT, features two NFC East rivals. In both regular season games, the Eagles came out victorious. However, Danny Dimes was not playing Danny “playoff” Dimes football. The Eagles are similar to the Chiefs because they had a bye last week. This could cause the Eagles o come out sluggish. Although even with some sluggishness in the first half I believe that the Eagles will come out in the second half guns a blazing to repeat for the third time this season and win over the New York football Giants 35 - 21 fly Eagles fly.

This highly anticipated, 2:00 CT kickoff, the matchup between the reining, defending AFC champion Cincinnati Bengals at arguably the best team in the AFC this season Buffalo Bills is one we were supposed to see in a week 17 matchup. However, that game was canceled after the unfortunate accident that happened between Bills safety Damar Hamlin and Bengals receiver Tee Higgins caused the game to be canceled. With Demar now in good health, both teams will be able to duke it out. I think this game will be the best game of the weekend and one we will constantly talk about throughout this year's playoffs and years to come. I truly don’t know who will win this game but I’m going to stick with the more well-rounded team in the Bills 28 - 21 Bills in the first of the new playoffs OT.

The final divisional round game in the 2022-2023 season kicks off at 5:30 CT. The Niners have been hot with Big Boy Brock Purdy at the helm. I tell you what Purdy has been looking pretty ”purdy”. This Niners team is ready to go. I don’t see a team that’s going to stop them. Other than this Dallas Cowboys team. If Dak can keep the ball in his possession and Pollard can do what Pollard does the Cowboys might upset. Although with Dallas’ track record in the playoffs, I will take Philly to move on in a 45 - 42 win to send America’s team back to Jerry World. 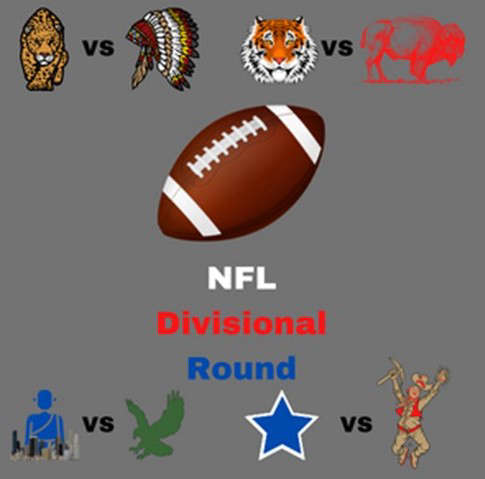