Yes, you read that title right. Bostonian and average JLO enjoyer Ben Affleck was spotted dawning the orange and magenta visor of Dunkin Daaaahnuhts (only said like this in Boston). The Boston native was spotted handing out the subpar doughnuts but excellent coffee, if I do say so myself, in Medford, Massachusetts a suburb of the “wonderful” city of Boston. Just imagine you’re driving to your miserable 9-5 job and think I need some coffee to make it through this mess. So you stop at Dunkin and then BAM! Right in front of you Batman in the flesh or Tony from Agro, writer of Good Will Hunting, Casey Affleck’s Brother, Jennifer Lopez’s Lover, etc. However, you see Ben you’d be shocked I think… I mean I would be he’s a fantastic writer, director, and actor. Now I know most of you would be excited for the other person that showed up. Jennifer Lopez also made an appearance. Although she wasn’t working she was just the driver thru but still. The reason for the two’s appearance is being reported as a commercial for the Super Bowl. I really hope the people at Dunkin are smart enough to make fun of these selves and go full Boston because that would be hilarious. I hope they do a similar commercial to this SNL skit Ben’s Brother, Casey was in. Just have the worker be a typical Bostonian.

I feel like this is one of the final things Ben Affleck needed to do before he died. I mean look at this picture of him.

Look how happy he is! That guy is living life. I guarantee you this was something he dreamed about when he was younger.

*In a Boston Accent*

“A Yeah I think when I grow up I want to work at Dunkin thats would be nice, you know what I’ll probably be dating Jennifer Lopez too.” Then I sure his friends told him that he was crazy and she would never date a Dunkin employee. Well look at him now *Enter White Trash Boston Name Here*! 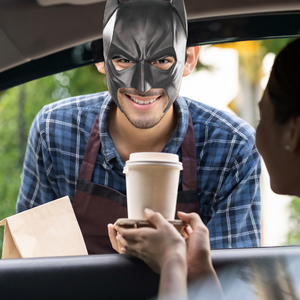